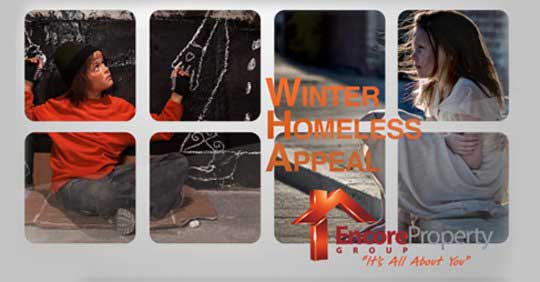 One in 200 Australian are homeless! This is fact!

Homeless Appeal aims to raise funds and goods to help families who will be affected by homelessness in Western Australia and particularly in Rockingham and Kwinana area.

As a nation we are great when supporting others when major disasters happen, yet we are forgetting that every day there are thousands of people who have no shelter. The fact is, it can happen to anyone.  You don’t have to be a criminal, drug addict or alcoholic to end up on the streets. According to statistics the majority of homeless in WA are kids under 12 years old.

What have they done to deserve that?

To help families affected by homelessness in our community, please make a donation today.

You can bring donations to our Office at Bertram!

Let’s work together to help improve the community we live in.

Can you imagine if your son or daughter had no place to sleep? When you see someone homeless on the street, try to imagine what it would be like not having a place to live. Imagine for a moment that you were faced with the experience of being homeless and had nowhere else to turn.

This is very hard all year around but in winter time even harder. It’s a crime that thousands of our friends and neighbours, mothers and fathers, grandparents and even children sleep on the streets of Perth every night!

We are so eager to support charities abroad, yet we don’t see what's happening just around the corner! Government spends millions on supporting other countries and yet we do have plenty of Australians suffering each day!

In our state – Western Australia statistic shows that 9,595 people are homeless.

The stress of being homeless has a different effect on different individuals especially a child.

Next time when you have a nice hot bubble bath with candles and watching meaningless sitcoms for hours on a couch with a big furry blanket think about those who may be had no chance to have a bath or shower for days and may be even hungry.